Tuck Studio, Saint John’s premiere furniture, lighting and décor studio, is heading ‘Uptown’. Early in the new year, owner and designer Judith Mackin and her team will be moving Tuck Studio from its current north end location, 40 Autumn Street, and setting up shop at 124 Prince William Street, in one of the city’s most historic properties, the Palatine building, constructed after the Great Fire in 1877-8.

Mackin’s sister company, PUNCH INSIDE, a design firm specializing in residential and commercial interiors, will also be moving its offices into the 2,300 square foot space. 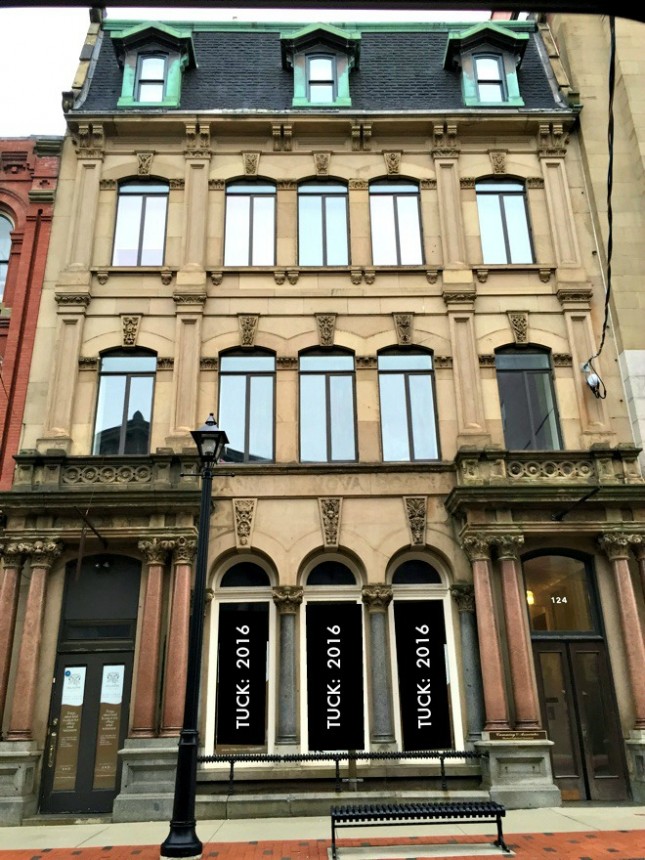 “Over the last three years we have been extremely fortunate to experience tremendous growth in our small business, so much so that we’ve outgrown our current space. With the support of our community we’ve managed to establish a loyal and growing clientele who have repeatedly shown us they are dedicated to supporting a small local design store. They are clients who care deeply about the furnishings, décor, art and the design services we provide,” Mackin says.

For several months Mackin had been looking at various locations both within the city and in the Rothesay/Quispamsis area. Although she grew up in Rothesay, she says her roots are in Saint John, and she’s delighted her business has found a home in the city.

“I’ve lived and worked in the city since 1985 and the Uptown is where I knew we ultimately had to be. When Robert and I walked through the doors at the Palatine and looked up at those 22 foot ceilings, we instantly knew that this would be the new location for Tuck Studio and our design offices. The amount of restoration work that the landlord has put into this space is nothing short of remarkable.   We’re so excited to connect with the energy and innovation that entrepreneurs are bringing to the uptown core with projects like Historica’s ‘Parkplace’, the building renovations by Gary and Pam Spicer, the new condos at the Royal (115 Prince William), to say nothing of the existing entrepreneurs Uptown, we knew this was our time to contribute and be part of what I love to call – the Renaissance spirit.”

Owner and landlord Dr. Edward Reardon says, “We’re delighted to have such a unique and energetic business in the Palatine, one I have no doubt will contribute so much to re-energizing the Trinity Royal area.”

Tuck Studio recently celebrated its three-year anniversary. It is currently located on level zero in the home Mackin shares with her husband, Robert Moore. The home and studio have garnered national and international attention through publications such as Chatelaine, International Architecture & Design, The Globe and Mail, HGTV, East Coast Living, Saltscapes, Playboy Magazine and most recently the W Network’s ‘Real Houses of…’ television series.

For its new uptown location of Tuck Studio, Mackin will be hiring more team members, expanding its hours and increasing its furnishing and décor offerings. She will be bringing in new product lines, many exclusive to the city and the province, as well as adding new artists, particularly Pamela Marie Pierce, to its already existing stable of artists, including Chris Lloyd, Darren Emenau, Gordon Jennings, Christiana Myers, Lise Hansen, Alexandra Darbyshire Flood, to name just a few.

Tuck Studio will continue to operate from its existing location until the new space is complete.  Estimated opening of their new location is scheduled for March 2016.

Mackin would like to thank Realtors Bob McVicar (Exit Realty) and John McAloney (Royal LePage Atlantic) for their aid in brokering this commercial property transaction.

Brief history of the Palatine:

DESCRIPTION :
Palatine Building is a 3 ½- storey stone Second Empire commercial building with two elaborate entrances at each side of the main façade and three roman arch windows in the central bay. Built in 1878, it is situated on Prince William Street in the Trinity Royal Preservation Area of the City of Saint John.
HERITAGE VALUE:
Palatine Building is designated a Local Historic Place for its architecture, its place within the streetscape and for its association with businesses that occupied the premises.
Palatine Building is one of a collection of commercial and residential, Italianate and Second Empire buildings that were built between 1877 and 1881 after two thirds of the City of Saint John was destroyed by the fire in 1877. This building is a good example of Second Empire commercial architecture from this period of rebuilding in Saint John. The traditional mansard roof, the elaborate window treatments and the overall symmetry of the front façade all reflect this style. The carved gargoyles were done by James McAvity. The architects of this grand building were Dumaresque and Dewar, of Halifax.
Palatine Building is also recognized as forming a part of the Prince William streetscape. This historic streetscape is distinguished by its rare concentration of homogeneous, primarily late 19th-century architecture. Traditionally referred to as the “Wall Street” of Saint John, the area contains major public buildings, banks, hotels, insurance, shipping and legal offices, and the Seamen’s Institute and Mission. More than half of these structures were erected immediately after the Great Fire of 1877. The work of prominent architects of Scottish, American and Canadian origin, the buildings represent solid, dignified and sometimes flamboyant interpretations of contemporary styles and building technology.
The Bank of Nova Scotia and the Palatine Insurance Company are part of the heritage value of this building. In June 1874, an agency of the Bank of Nova Scotia was opened in Saint John in the Maritime Bank Building over the Bank of Montreal offices. The Cushing Building on Prince William Street was bought and occupied in 1876 and was burned in the 1877 fire. Two months later, in August 1877, the board had accepted plans and specifications for this present building, which stands on the same site. The Palatine Insurance Company was a fire and automobile insurance company that remained in this building for many years.
All images: New Brunswick Museum 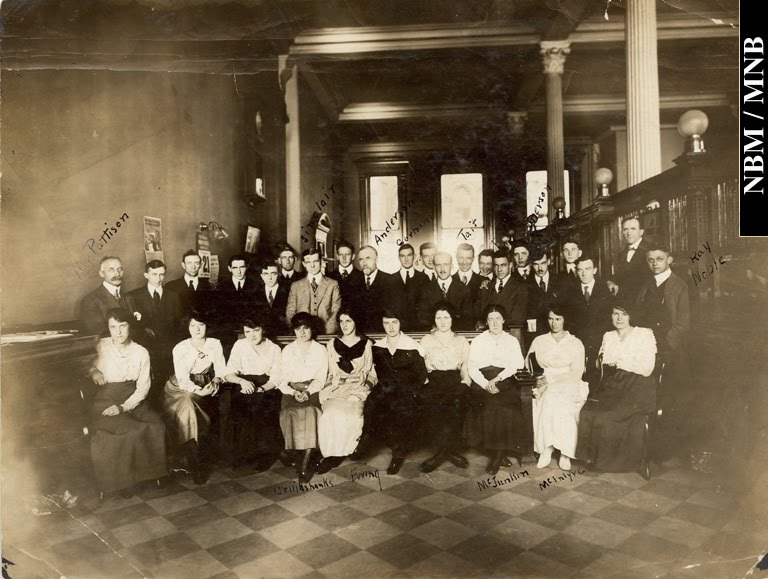 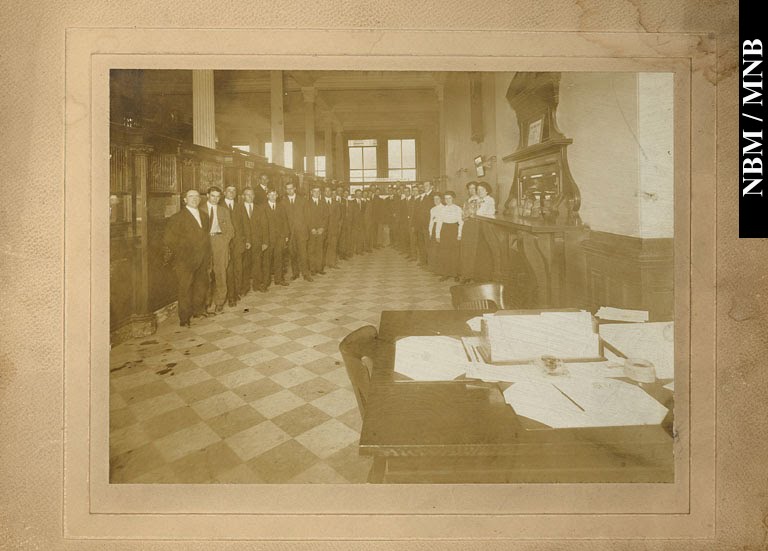 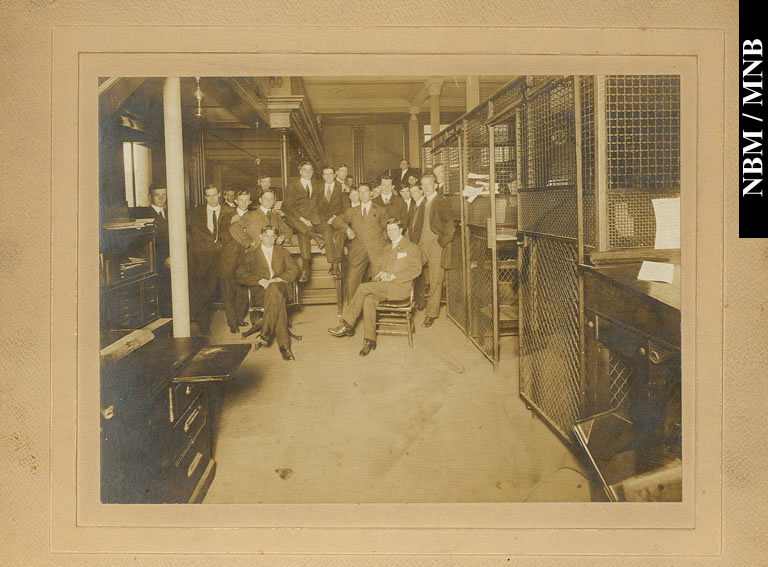 Interior view of the back rooms of the Bank of Nova Scotia with half of the employees, Prince William Street, Saint John, NB
Date: 1913
-30-