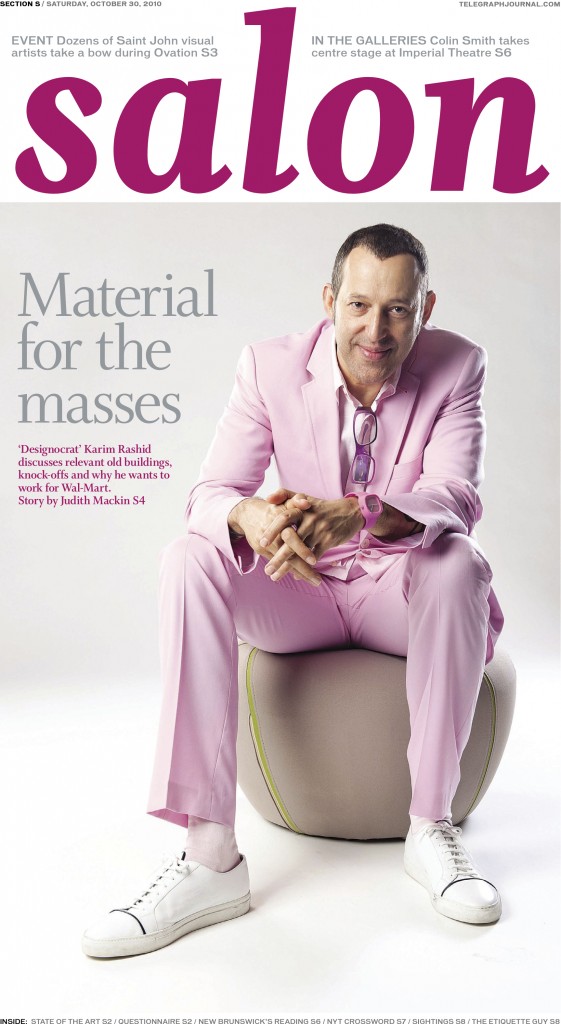 Why bring a futuristic designer - a man who designs buildings, furniture and interiors for companies like Acme, Alessi, Disney and Coca-Cola - to New Brunswick to share his vision of the new in the oldest incorporated city of Canada?

Once upon a time, not so very long ago, on the high seas between England and Canada, the Rashid family - mother, father and two sons - originally from Egypt, and then from London, are aboard the RMS Queen Elizabeth 2 heading for Toronto. Mid-crossing, the youngest of the two sons, five-year-old Karim, entered a drawing competition organized by the ship's staff.

Close to 300 children took part. Almost all of the drawings depicted subject matter you'd expect in children's drawings: landscapes, cars, families, animals. Fascinated by the idea that his family's entire life could be packed into a few crates and bags, Karim drew the family luggage. And won the contest.

That precocious display of sensitivity to the role ordinary objects play in our lives and how meaningful the relationship between form and function can be, carried Karim Rashid onward from that contest to his current status as one of the most influential industrial designers working in the world today.

Hailed by Time magazine in 2001 as "the Most Famous Industrial Designer in All the Americas," the King of Industrial Design is coming to Saint John on Thursday to speak to both design enthusiasts and design innocents alike at a free event at Imperial Theatre.

Rashid is the prime mover behind more than 3,000 designs - everything from dog bones to candle sticks, vacuum cleaners, clothing, watches, couches and chess sets. As a result, Karim Rashid has become a household name.

That is just the way Rashid, the "designocrat," wants it. As he notes in his esthetic manifesto, I want to Change the World, his primary and ongoing focus is designing not for some privileged elite, but for the masses.

"I'm interested in 'designocracy,' in making things that really touch everybody's lives," Rashid explains by phone from his studios in New York City. "I have been pushing this for a very long time."

Rashid is firm in his belief that everyone, whatever their background or degree of avowed interest, inherently appreciates strong design.

And while the prevailing perception may be that designer goods are beyond the reach of the average consumer, here in New Brunswick, for instance, one can go to the nearest Shoppers Drug Mart and pick up a piece of genuine Rashid: he's done all of the method line of home and personal care products. You can also find Rashid designs in everything from a local box store such as Kent to boutique outlets throughout the province. Terra Verde in Moncton and Décor8 in Saint John carry his Garbino garbage can along with his famous Oh Chair, designed for Umbra, which have both sold millions worldwide.

"The problem is, as a designer, and it is a bit of a catch-22, that as you get more famous you get brands that come to you more for the 'endorsement' than to actually make things that people use in their everyday lives.

"You end up getting approached by a lot of luxury brands. And when they come to you, they want to do a 'one-off,' a limited edition. But what's difficult about that is I want the companies that make all this banal stuff in our lives to come to me!"

Given his household fame, you would think the manufacturers of all that "banal stuff" would be lining up at Rashid's studio door.

Well, not exactly. The reason, as Rashid points out, is that for the last 20 years most of these companies haven't really designed anything meaningful. Instead, they either "knock off" original designs or rely upon conservative in-house design teams habituated to industry norms. Their focus tends to be determined almost exclusively by function rather than what Rashid calls "the human emotional side or interface" of design.

Rashid simply can't understand why these companies - which collectively determine the design of so much of our immediate material world - generally aren't inclined to rethink their approach.

Looking around his office, at his list of current projects and designs, Rashid says about 95 per cent of his contracts come from outside of America.

"So, again the catch-22 is, yes, I am becoming very popular and yet I am still having problems trying to do the 'popular' things I want to do closer to home. For example, I would be very happy to get a call from Wal-Mart!"

Rashid was invited to New Brunswick as part of Saint John 225's 2010 Cultural Capital of Canada Speaker Series to foster awareness of the importance of cultural, arts and design in the Port City.

But why bring a futuristic designer - the fellow so often seen on the world stage in his signature pink suit, the man who designs buildings, furniture and interiors for companies like Acme, Alessi, Disney and Coca-Cola - to share his vision of the new in the oldest incorporated city of Canada? It's a question made even more curious given his apparent lack of interest in history and disdain for things of the past. This is the man who pronounced poetry, for instance, all but "dead" as a viable art form.

Saint John, after all, is a city demonstrably committed to its past, most especially to the preservation of its 19th-century architecture and to the cultivation of its Loyalist roots. Its uniquely preserved and restored physical heritage attracts tens of thousands of visitors a year on the basis of its commitment to the old.

Saint John's respect for the past, its policy of preservation, has understandably engendered among us a certain suspicion of modern architecture and design. Given Rashid's ostensible lack of interest in anything old, what does this committed purveyor of all things new have to offer us?

By way of underscoring just how important the arts are to Saint John, Janet Scott, chairwoman of the Speaking Series Committee, points out that our city has more than 2,000 people employed in jobs in the arts and culture industry, ranging from theatre and dance to graphic design and broadcasting.

"Many people think about arts and culture only in terms of 'the arts,'" Scott says, "and don't realize that, apart from enriching our lives on so many levels, it is a vibrant industry in Saint John and a key component to the growth of our economy."

Several weeks ago, as part of the speakers' series, one of Canada's most "ardent cultural warriors," Simon Brault, author of No Culture, No Future, spoke in Saint John. While here, he challenged the virtues of our current views on the function of culture; he exhorted this community to embrace a future fully committed to cultural development.

The arrival of Karim Rashid in Saint John is a perfect expression of that commitment. Given that Rashid's public pronouncements range from the informed to the unexpected to the controversial, the committee is confident his visit will foster a lively conversation on the importance of art and design in the lives of all New Brunswickers.

"This is how I look at the world - you have the Vatican and beside it you could have the most incredible new contemporary structure by Zaha Hadid (the Iraqi architect who won the 2004 Pritzker Prize, the 'Nobel Prize' of architecture). That kind of juxtaposition of old and radically new is what always makes up the urban fabric.

"If I walk through New York, in one street I will probably see buildings from the 1800s and see a building from 2010. And that should be the way it is in any lively urban environment.

"As we as human beings age, it is beautiful to have this poetic landscape of our history. But that history has to move from then all the way to now and forward! The problem with these issues - and I've had several architectural projects in which I have come up against board members and preservation committees - their views are really myopic. If something is sacred and old - and let me just add to that, beautiful - it is worth keeping. That's one thing, but because something is old doesn't necessarily mean it is worth keeping. We need a balance of the contemporary mixed into the heritage."

And if, for Rashid, the old has a lot to answer for, the same is no less true of the new.

Rashid, for example, is unrelenting in his contempt for so-called "billboard architecture."

Rashid says the most important thing he can hope for from his visit to Saint John is very simple: an audience. Not just any audience, but an audience whose interests are wide-ranging, whose level of acquaintance with the often esoteric world of high design need be nothing more than passing, at best.

Recently, he found himself in Los Angeles speaking to a class of 300 students in a design school, but he would have been happier speaking to L.A.'s general public.

More often than not, as so often happens to Rashid, artists and designers end up preaching to the converted. The key element of his potential audience is often absent from the room - ordinary citizens and the politicians and leaders in the business community, the decision makers who can help support and implement change.

It remains to be seen if Rashid's visit will leave any kind of lasting mark on Saint John, a city so steeped in its past, so attached to its identity as a centre of heritage.

One thing, however, is clear: At 50 years old, Karim Rashid has managed to make an indelible mark on the world.

A citizen of Egypt and Canada, Rashid is a citizen of both one of the most ancient of civilizations and the youngest of nations. He embodies the tension between the need to look to the past and to constantly reinvent ourselves.

How strangely apt it is that this world-class designer, the Egyptian-Canadian, began his career, as it were, drawing luggage, instinctively drawn to the things that we bring with us when we travel between worlds, between an old life and a new one.

Judith Mackin is a freelance journalist who lives in Saint John, New Brunswick. You can read Judith's interior design column "Design Driven" in Salon every second Saturday. She can be reached at judithm@nbnet.nb.ca.