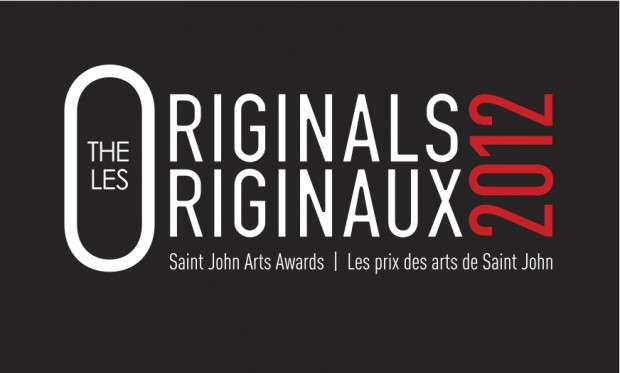 Please note*  Photography and Finalist / Winner films are at the end of this blog.

On the evening of May 31st, 2012 close to 700 arts supporters gathered at the Imperial Theatre to take in the city’s second biennial awards, ‘The Originals/Les Originaux’.
They came to celebrate the city’s finest artists, arts organizations, arts volunteers and arts patrons. 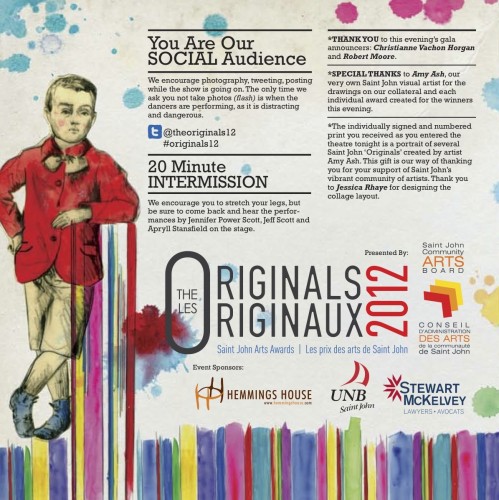 Inside Cover of program.

Working with a volunteer committee (Peter Buckland, Michael Wennberg, David Adams) and the city’s cultural affairs officer Bernard Cormier as liaison, I was asked to artistically direct this year’s awards as I had in 2010. Of course, I was excited and honored to work with the arts community again, but I’d be lying if I said my embrace of the opportunity didn’t come with some ambivalence. Given that the city had responded with such generous approval of the inaugural awards in 2010 I wondered if could recreate a ‘new’ experience for this year’s awards. Adding to my ambivalence was the fact that, weeks after my contract was signed and work was well under way, we, along with the rest of the city, learned of massive cuts to the city’s budget which left us with a mere $10,000 confirmed to underwrite this event.

But, as only Saint John can, and only Saint John did, we managed, with the help of generous sponsors — big corporations, small businesses and generous individuals — to raise enough money to pull off another arts gala, one that hopefully that made the city proud. In 2010, our emcee Brent Bambury remarked that he was shocked to learn that we pulled the entire event off for less than $80,000.00. This year, our budget was considerably less than that! A tremendous ‘shout out’ to all our sponsors and individuals who invested their money, their time, and their ‘in kind’ donations to this gala. 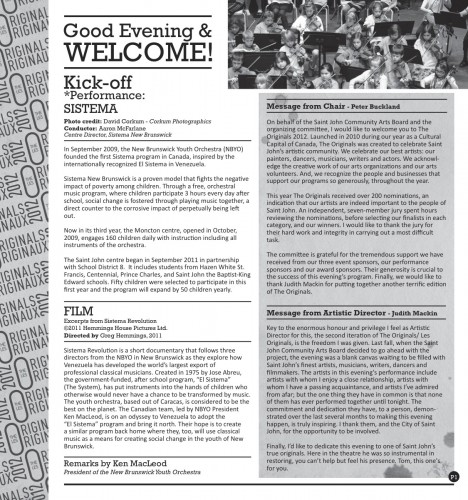 Page One of the Program

Attached is the brochure (designed by Jessica Rhaye Design in collaboration with PUNCH Productions) featuring the beautiful artwork of Amy Ash. This program lists all those who have been involved with the Arts Gala. I do want to acknowledge a few individuals however that either a) didn’t make it into the program or b) made it into the program but need to be recognized again. 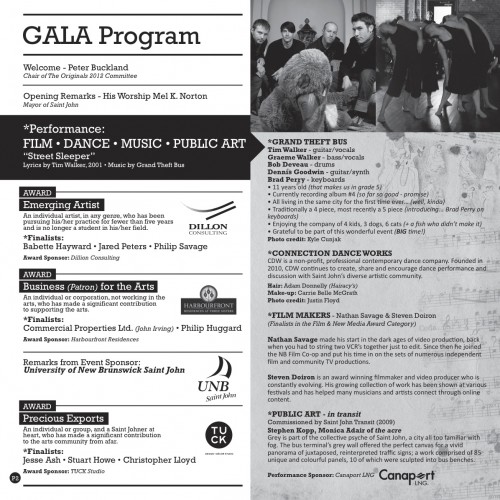 Page Two of the Program

Thank you to both Chloe Squance and Geneviève Brideau who kindly volunteered their time in handing out the winning envelopes and awards backstage to the presenters. Young up and coming artists in their own rite, I was grateful for their help. Additionally, I’d like to thank Adam Donnelly from Hairacy’s and Carrie Belle McGrath for their behind the scenes in making our dancers and performers beautiful. They worked very hard all day and watched from the sidelines. Sarah Tapley, my co-worker here at PUNCH Productions, helped me with so many details and I’m so grateful to her for all her hard work. Amy Ash sat for hours signing each of those beautiful individual artworks you all received when you came through the doors. 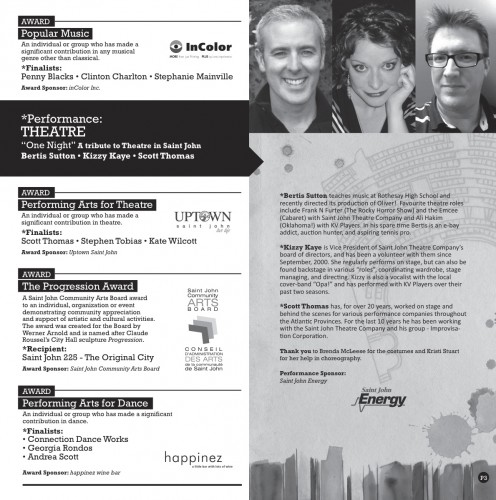 Page Three of the Program

Mark Hemmings worked his gluteus maximus off on those films. We realize that Hemmings House sponsored a part of those awards, but I have to say Mark went hours and hours above and beyond to make those films the gems that they are. Thank you so much Mark for your creative attention to detail. 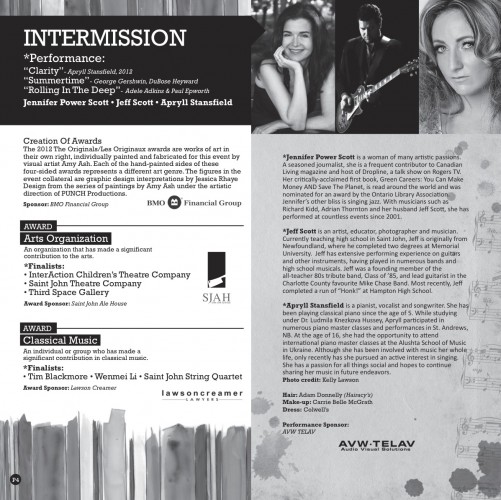 Page Four of the Program

The crew at the Imperial Theatre are full-on pros. I can’t sing their praises enough – the folks that direct lighting, sound and call the show. Malcolm, Jason, Shelly, Bob, Al, Jim, and the rest of the crew were a dream to deal with. The Theatre and the crew are a true gift to this city.  Additionally, I can’t sing Chris Shannon’s praises highly enough – my AVW TELAV on site ‘IT’ guy.  I can tell you with a show as intricate as the Originals (films, ppt, minifilms, cycs, etc.) you want Chris beside you the entire night!  So grateful for his expertise.  Thanks Chris! 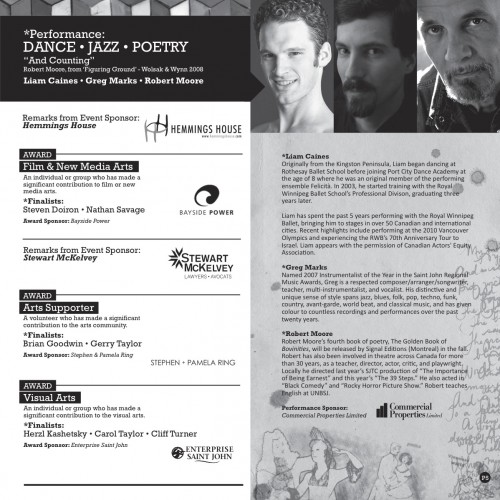 Page Five of the Program 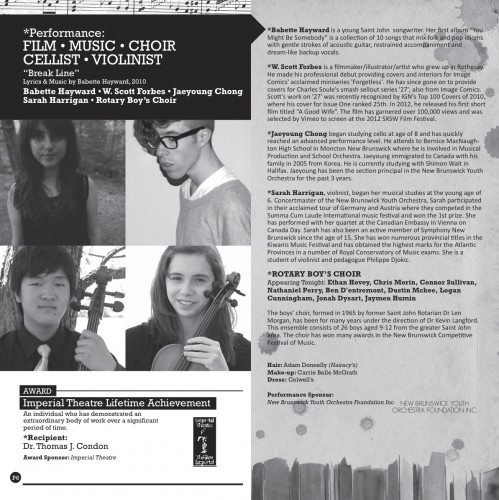 Page Six of the Program 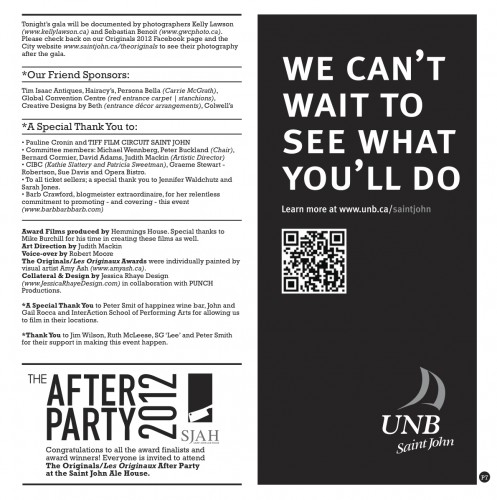 Page Seven of the Program 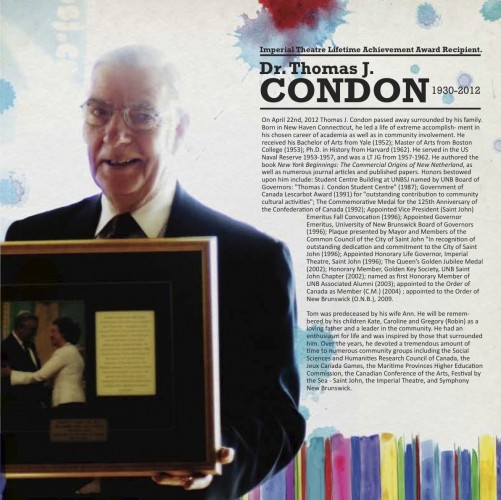 Although I mentioned Barb Crawford in the program, she bears acknowledging again. Barb conducted close to 30 invidual interviews with all the finalists for the 11 categories.  Check out her blog to see for yourself.  www.barbbarbbarb.com – Thank you again Barb!  xo

We thanked Peter Stoddard from the Saint John Ale House, and Chef Jesse Vergen, for the After Party, but we didn’t know just how great it was actually going to be when the program went to print. The Ale House rocked with artistic food, meat dresses and drinks galore! Thank you so much for supporting and hosting the guests of the Gala.  You guys truly are great!

Finally, as always there is always one person that always stands out to me in terms of his commitment to giving to the arts community ‘silently’ and diligently. He never draws attention to any of his efforts and give oodles of time. Michael Wennberg is a true Original in our city and this community is damn lucky to have him. I will sit on any committee or work on any project that Michael is involved with.  If you don’t know him (which is doubtful) you can identify him as that guy with the ‘red’ pen.

A special thank you and gratitude goes out to all the artists/performers who trusted my vision and agreed to collaborate with the pieces I chose. You all exceeded my own vision and expectations with your talent and beauty. Thank you for allowing me the privilege to work with you all.  Aaron MacFarlane and Sistema Saint John, Grand Theft Bus, Connection Dance Works, Nathan Savage, Steve Doiron, Stephen Kopp, Monica Adair, Kizzy Kaye, Bertis Sutton, Scott Thomas, Apryll Stansfield, Jennifer  Power Scott, Jeff Scott, Liam Caines, Greg Marks, Robert Moore, Babette Hayward, Kevin Langford and the nine boys from the Rotary Boy’s Choir, Jaeyoung Chong, Sarah Harrigan, and W. Scott Forbes.

Below are the films produced by Hemmings House. Edited by Mark Hemmings.  Art Director:  Judith Mackin

Additional Films:
Throughout the evening the audience was encouraged to post and film the evening through Social Media. I encourage you to look through the Originals Facebook Page as well as the twitter feeds: #originals12 and @theoriginals12 to sift your way through dozens of posts and pics, captured by members of the audience.

Here are some tweets/hashtags that I especially liked:

And, the final performance / collaboration of the evening with singer/songwriter, Babette Hayward, Cellist Jaeyoung Chong, Violinist Sarah Harrigan and nine members of the Rotary Boy’s Choir. Film in background by W. Scott Forbes.

I’ll upload some additional performance films produced by Hemmings House in a few days. Please check back for those.

And so, without further ado – the moment we are all waiting for: the PICS of The Gala itself from Red Carpet, speakers, sponsors, winners and performers!
There are two large photo galleries below.

The first set is photographs are by Sebastien Benoit. Please ensure you give photo credit when reposting. Thank you.

The second set of photographs are by Kelly Lawson.  Please ensure you give photo credit when reposting.  Thank you.
[nggallery id=98]
What was your special moment of the Originals?  Any pics you would like to share or thoughts? Please do so by visiting our Originals 2012 facebook page – it is open for all to post.
Thank you for reading.