here was created to offer a fresh perspective on topics such as the arts, politics, entertainment, and social issues, and to reflect the views of a young, progressive voice. The company’s vision was to have three editions of the newspaper in the province’s major urban centres – Saint John, Moncton, and Fredericton – making here the urban voice of New Brunswick.

Sadly, due to competitive factors, and the desire to keep staff employed, the owners of here newspaper sold their publishing rights in 2004 to Brunswick New Inc. 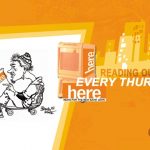