The first priority in this redesign was to give the pub its own identity, to make the pub more than an extension of the restaurant upstairs.  Peter Stoddart (owner), who was celebrating his tenth anniversary, had just signed a new ten-year lease with Market Square/Hardman Group. He wanted to restore beer to its position of privilege in what, after all, is called an ‘ale house.’  Our job was to connect that emphasis on beer with Peter’s commitment to the Renaissance City!

Enter our brainchild:  “Ren-Ale-Sance: the Rebirth of Beer.”

From a design perspective this emphasis on ‘rebirth’ was the springboard of the redesign.  To realize our vision, we had essentially three major challenges to overcome:
1. The bar was dark.  The relative lack of natural light was exacerbated by the lack of clarity in the bar’s current layout.
2. The visual landscape was extremely cluttered; it lacked focus and coherence.
3. The ‘ale house’s’ primary focus, the source of its identity — beer — had somehow been obscured over the years, at least visually.

All photography by Kelly Lawson.

– Removed all of the existing taps and clutter from the front of the bar.  We moved the taps to a central position on the bar’s feature wall.
– A complete overhaul of the physical seating area/bar.  The bar now boasts a New Brunswick Live Edge Maple surface (2014) built by Cabinetmaker, Brent Rourke / The Barn in Bloomfield.
– Removal of TV, pipes; the hard liquor was moved to the expanded section to the left of the bar.  Beer Signage and taps now seated in an easily visible and coherent arrangement displaying the full range of beers on tap.

We covered the brick wall with up-cycled boards taken from the back hallway (left over from the original Don Cherry’s restaurant that was in this location over a decade ago).  We then designed and placed the Pub’s new branding “REN-ALE-SANCE” in neon lettering accompanied by the tagline “The Rebirth of Beer” in hand-forged copper lettering.

On the right hand side of the bar we created a new ‘wine’ section that houses red on the top shelf and cold white wine below in ice.

All walls were covered with high gloss black laminate to reflect the warm filament lightbulbs through the pub.

We replaced the worn floors with new ‘industrial’ looking diamond plate tiles.  From B & N Flooring. 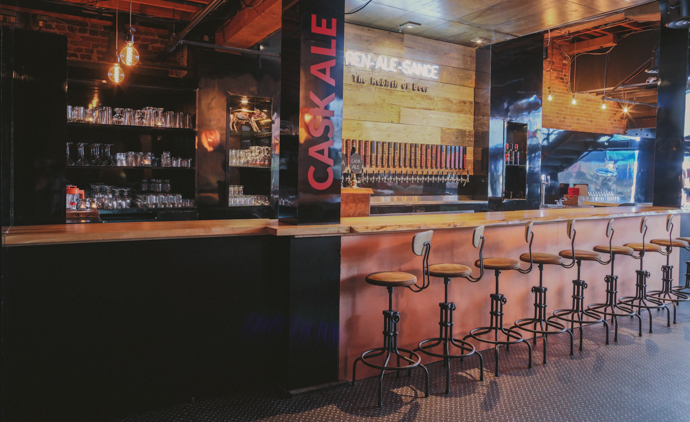 We sourced the neon sign to anchor the back of the bar from the talented team of brothers at Design Art Signs; Anthony & Matt Milton executed our vision perfectly.

A long-time friend of Peter’s and native of Saint John, Rob Gamble and his company AFAB Ornamental Ironworks, hand forged all the copper lettering in the font we had chosen.
And the signage for the taps?  Simple bars of easily detachable painted wood with decals placed on top! Once the keg runs dry, it is simply replaced with one that says ‘All tapped out’.

We removed the table and chairs and designed a flexible communal banquette area suitable for large groups or just a group for two!
We sanded and lightened the original floors.

We designed unique pillows for the Saint John Ale House, celebrating the history of beer-making in the City of Saint John.

We hung 30 filament light bulbs of various sizes  in the three Asaki pendants (Tuck Studio) to create a canopy of warm light.

This new communal seating area was, on so many levels, a collaborative effort. Designed by me & Sarah Tapley, the seating area and the base of the communal table was fabricated by longtime SJAH employee Chris Barry, affectionately known to all as ‘Bear.’ Peace of Mind Management was instrumental in the build as well.

The two slabs came from a large red spruce log that washed up on shore in the flood of 2008.  Since the early 1800’s logs were floated down the St. John River and stored in South Bay which at the time had many mills.  The tree from which this slab came is estimated to be over 300 years old. It isn’t known how long the log was submerged.  Judging from its size and character, however, it was likely in the water for well over hundred years.  Many of the highest quality trees in NB had been harvested by the turn of the century.

A special pillow was designed to christen and name the communal seating area “Bear’s Den” for all the hard work and long nights Chris Barry put into creating this, his first commercial project.

All seating was upholstered by A-1 Upholstery.

The boards are from a turn-of-the-century home originally built for resident farm hands in South Bay, then a suburb of Saint John (maybe part of Lancaster). The framing material the post and beam construction consisted of locally sourced red spruce, hand hewn into square timbers.  Most of the wood used for the Saint John Ale House project is from the floors and subfloors, a mixture of douglas fir, eastern hemlock and red spruce.

As farming declined over the decades the home was rented to several families. The Baker family, the last residents to occupy the home, lived there until the late 1980’s. In 2006, the home in serious decline. A decision was made to dismantle the building and salvage as much material as possible.  Most of the work was done by hand, including the removal of every nail. The boards are thoroughly integrated into the SJAH design, principally as cladding for the original cold, black wrought-iron railings under the central communal table. Thank you to Derrick and Amy Mitchell for trusting us with their materials.

We created  a ‘heart’ for the pub, another gathering area where large groups could reserve the island and feel connected.
In keeping with the emphasis on ‘warmth’ we added three Canadian-designed pendants by Isabelle Auger /Atelier Cocotte (TUCK STUDIO) made from white birch to add drama to the seating area.
We covered up the pillars with black laminate and covered up the cold wrought-iron railing with the same floor boards that are in Bear’s Den.
We painted the entire ceiling black to cover up the mismatched HVAC.

Detail of Isabelle Auger’s lights, which give a nod to the shape of ‘hops’.

All the booths were repainted with a tan colour and new reupholstery to match.  Colette Pendant lights from Tuck Studio hang over each booth.

I spotted this large Moose head in a photograph that Sean McGrath had taken while on a photo shoot at Moosehead Breweries.  I had originally planned to put a very large black and white historic photograph in this particular location on the wall. When I saw this pic I suggested that we simply write to the Olands and ask if they would be willing to loan it so that all could enjoy it.  Happily for Peter and all those who visit the Ale House, we can all enjoy the Olands’ generosity as the Moose is on permanent loan.

A few design details of another sort:

Peter has installed USB plugs in the outlets by the booths to recharge your techy stuff.

Specifically designed for the Hospitality Industry, Q water offers a unique filtration system that filters the tap water which then dispenses Still and Sparkling Q water into reusable glass decanters.
Benefits to Consumers: Less costs (than local or imported bottles), Great taste and a Healthier Product

I particularly love the signage Marc Lewis and his team from 3’o’clock put together for their latest ‘Hot Dog’ campaign.

It takes a whole lot of local to re-build a bar and Peter is all about the Local!

A tremendous group to work with (including, but not limited to:) Peter’s father, Jim Stoddart, Peter’s wife, Michelle Stoddart, the staff were remarkable, volunteering their time on ‘off hours’!

Incredible team to work with for all carpentry, millwork and fabrication throughout: POMM (Peace of Mind Management):

All Interior Design by PUNCH INSIDE Judith Mackin & Sarah (Tapley) Homenick.
All lighting and furnishings through Tuck Studio.
To see the entire Photo gallery by Kelly Lawson scroll through below: